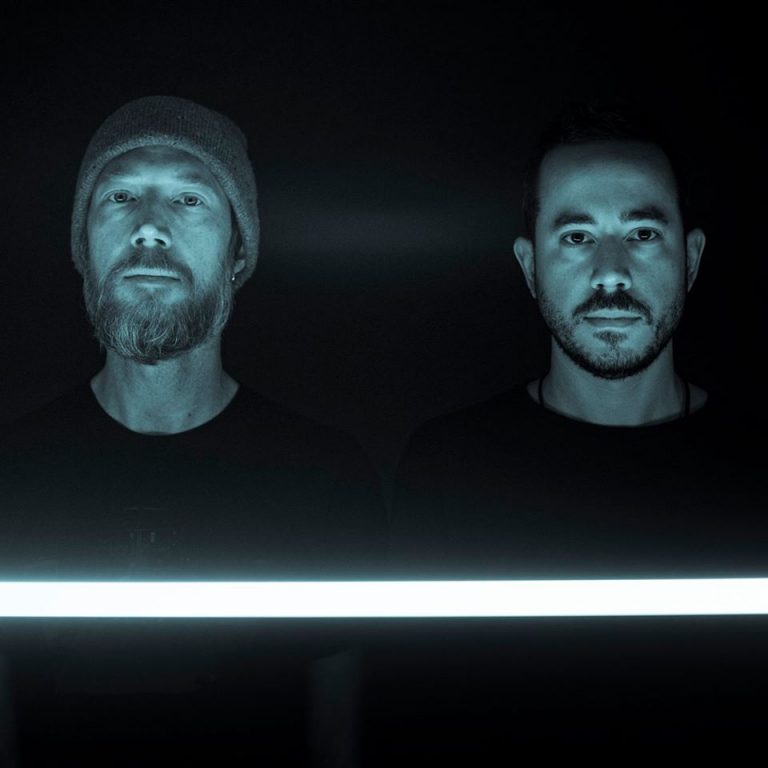 Since 2001, instrumental duo ZOMBI has led the charge for a modern reappraisal of progressive and electronic rock music among a younger generation. Creating a signature sound out of bass guitar, drums, and analog synthesizers – and demonstrating how to play them all simultaneously in the live setting – their taut musicianship and sterling arrangements create an unmistakable atmosphere, unifying fans of metal, indie rock, horror soundtracks, new age, and dance music, with their prog-minded brethren across the aisle. Over the years, the group has drawn inspiration from a vast assortment of musical material, ranging from soundtracks to Krautrock legends Neu! and Harmonia to the pioneering work of icons like Genesis, Vangelis, Tangerine Dream, Van Halen, and Pink Floyd, to the candy-colored sounds of italo disco and the smoky corridors of dark danse.

Steve Moore (bass, synthesizers) and A.E. Paterra (drums) met through playing in no-wave bands in their hometown of Pittsburgh. As their respective activities in Microwaves and The 1985 wound down, the two bonded over their love of Italian soundtrack composers like Goblin and Fabio Frizzi, and over the presence of filmmaker George A. Romero ingrained across the city. To say that Romero’s films have affected the cultural memory of Pittsburgh and all who grew up around there is a profound understatement. Moore grew up in Monroeville, home to the mall used in Romero’s 1978 classic Dawn Of The Dead, while Paterra was raised in Canonsburg, not far from where Tom Savini directed the 1990 remake of Romero’s Night Of The Living Dead. Taking the European release title for Dawn Of The Dead for their moniker, ZOMBI was born.

The group released two CD-Rs (a self-titled full-length, and a follow-up EP, Twilight Sentinel, both compiled on the VCO release The Zombi Anthology and issued separately on vinyl), attracting the attention of Relapse, who signed ZOMBI in 2004. Extensive touring before and after the release of their first two Relapse full-lengths (2004’s Cosmos and 2006’s Surface To Air) found ZOMBI embarking on nationwide dates alongside artists like The Dillinger Escape Plan, The Fucking Champs, Guapo, Isis, Trans Am, Maserati, and Don Caballero. During this time, ZOMBI was also commissioned to record original soundtracks of their own, first for filmmaker Adam Wingard’s 2003 debut feature Home Sick, and then again for Nick Palumbo’s ToeTag-anchored slasher Murder-Set-Pieces (2004).

As touring activity slowed down, ZOMBI’s musical horizons broadened in scope, both in the extreme sides of their 2009 album Spirit Animal and in 2011’s Escape Velocity, their most synth- heavy work to date (and possibly the only Relapse release to ever feature a progressive house track). As the group looked beyond the methodologies of horror-influenced prog/synthscapes (a field which was becoming more and more crowded with new participants and fans in each successive year), the ambitions of Moore and Paterra grew as well, and the two embarked on their own projects.

Steve Moore performs solo under his own name as well as under a number of different guises – Gianni Rossi; Lovelock; Miracle, a collaboration with Daniel O’Sullivan (Ulver, Guapo, Aethenor) – with personalities to match. He’s surfaced as a dance music producer for labels like L.I.E.S., Kompakt, and Future Times, and has released cerebral, New Age-oriented material on Cuneiform, Static Caravan, and Mexican Summer. He’s also continued to follow his soundtrack ambitions, scoring the 2005 documentary Horror Business, returning to work with Adam Wingard on his 2014 retro-thriller The Guest (and also landing a cameo – look for the guy wearing the mask in the party scene), and composing for Belgian director Jonas Govaerts’ gruesome wilderness horror film Cub, due for release in America in 2015.

A.E. Paterra has recorded and remixed extensively with his own solo project, Majeure, with three full-lengths on the Temporary Residence label and a number of EPs under his belt (including a split shared with Steve Moore, entitled Brainstorm). Majeure served as dedicated support for Mogwai’s 2014 North American tour, and a new Majeure album is due out on Constellation Tatsu in early 2016. Paterra also participates in Contact, a trans-Atlantic project with British musician Paul Lawler, has played drums for Ohio wildmen Gil Mantera’s Party Dream, and briefly joined post-y instrumentalists Maserati, allowing them to continue on after the tragic loss of their drummer, Jerry Fuchs. Moore and Paterra also co-manage the VCO Recordings imprint, issuing electronic works on limited edition cassettes for artists such as Günter Schickert and Jonas Reinhardt as a way to pay tribute to their influences and introduce newer artists on similar paths to enlightened ears.

2013 saw all of ZOMBI’s efforts come to fruition when they were asked to open the inaugural U.S. touring dates for Italian legends Goblin. For the first live ZOMBI dates since 2007, the two dusted off their gear and exploded into action, raising the spirits of all in attendance. Goblin then upped the ante by inviting Moore to perform as part of their group as a synth player on additional dates, and both bands were both invited to play at 2015’s Roadburn festival. These instances contributed directly to the creation of ZOMBI’s latest full-length, Shape Shift. The album was self-produced by the band and recorded at Machine Age Studios in Pittsburgh, and Steve Moore’s private studio in central New York. Moore commented on the new material: “It’s a rock record – think of it as a follow-up to Surface To Air. There are no techno jams or symphonic prog fantasies. No solo track interludes. It’s dark and heavy. Live drums on every song and lots of bass guitar. We have officially moved from ‘studio project’ mode back into ‘live band’ mode.”

It would be neither difficult nor unfair to cite ZOMBI as a catalyst for the multitudes of soundtrack-oriented synth acts in their wake, the demand for pre-recorded VHS movies on the secondary market, and the recent surge in reissues of original horror and sci-fi soundtracks and fan art. Alone and as a group, the members of ZOMBI have exerted an influence across a number of niche interests, and have brought them together under their dusters. Whether you’re an adventurous listener, die-hard fan, or skeptical observer, delving into the latest chapter of ZOMBI’s expansive oeuvre will never disappoint. ZOMBI have made an indelible mark on several marginalized forms of music, a mark which was deepened even further with the release of Shape Shift.