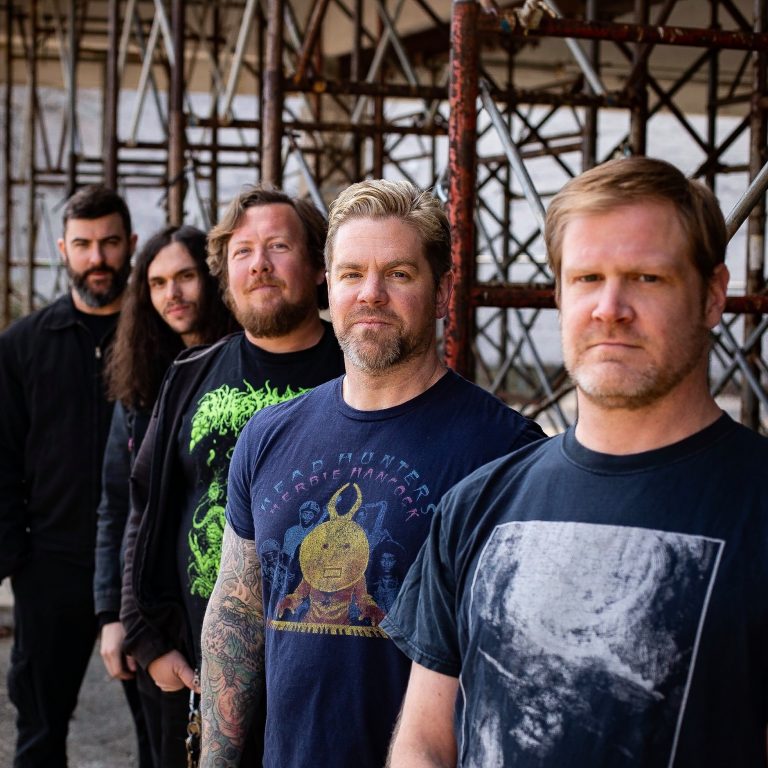 It’s been 17 years since Jennifer playfully wrestled her friend to the ground in front of the snow cone stand.

Nearly two decades on, the deeply unsettling introduction to Pig Destroyer’s Prowler In The Yard is like a dog whistle for grind fanatics everywhere. The band’s snarling 2001 album also happened to be their Relapse debut and their first real introduction to a global audience. It’s since been inducted into Decibel magazine’s hallowed Hall Of Fame—a long-running institution celebrating the creation of extreme metal’s greatest albums. It’s also a fucking masterpiece.

Of course, Pig Destroyer had been around for a few years before Prowler hit the underground like a chainsaw to the jugular. Back in ’97, it was just three kids in a Virginia basement recording 30-second blast freakouts on cobbled-together equipment. Ask PD guitarist, producer and co-founder Scott Hull if he thought he’d still be in the grind game 21 years after the band began, and he’ll just start laughing. “No way,” he says. “The biggest aspiration we had was to put out a seven-inch. We thought full-length records were kinda bourgeois.”

And yet here we are, holding Pig Destroyer’s sixth full-length in our sweaty paws. Entitled Head Cage, it takes its name from a grisly medieval torture device. Vocalist JR Hayes says it was inspired by lyric he used on a noise project with PD synth/sample overlord Blake Harrison: “It encapsulated not only some of the themes on this album, but on many of our past records as well. Themes like isolation, depression, and anxiety. You know—feel good kind of stuff.”

Coming nearly six years after 2012’s Book Burner, Head Cage has had plenty of time to gestate into a fully formed monstrosity. “The word ‘deliberate’ comes to mind when I think about this record,” Hull says. “Some of these songs have been written for two or three years. I made a very conscious effort to play and write out of my comfort zone. Whether it sounds like that or not, I’m not really sure. But I intentionally tried to not listen to the bands I usually listen to for inspiration. I went completely against the playbook for the first part of the record.”

Instead of his regular inspirational diet of Brutal Truth, Discordance Axis and Slayer, Hull immersed himself in the catchier side of noise rock, like Cherubs and Metz. “I probably listened to those two bands more than anything else while writing this record—at least at the beginning,” he says. “Then I let my Confessor and Loincloth influences come out, which accounts for some of the weird time signature stuff that’s in there. If my bandmates hadn’t reigned me in, I probably would’ve written a whole record like that.”

The result is a Pig Destroyer album like no other. “We just needed to move forward and broaden the palette a little bit so when we look back at our discography or at our bag of songs to play live, there’s some variation and some depth. I didn’t wanna repeat myself.”

At first, there were rules. “When I started writing the album, I said, ‘Absolutely no blastbeats,’” Hull recalls. “I wanted to stay away from 4/4 time signatures. I wanted to write something that was just absolutely different. But my bandmates were kinda wincing at the no-blastbeats thing, so I eased back into listening to Assück and Human Remains and stuff like that. That’s why the record doesn’t sound inconsistent with the rest of our discography. But hopefully it’s a little more angular and weird than what we usually do.”

Head Cage marks the band’s first album with bassist John Jarvis and the first on which drummer Adam Jarvis—John’s cousin—was involved from the start of the writing process. “John and Adam are incredibly valuable to us,” Hull explains. “We call ’em the Jarvi. They fit into the band spectacularly well and they can play their instruments like nobody else.”

Over in the lyrical department, Hayes is in top form. “House Of Snakes” is a classic Pig Destroyer horror story—with an autobiographical twist. “There’s this creepy house that me and some other people were trespassing in, and we didn’t realize until we got all the way inside that we were surrounded by dozens and dozens of snakes,” Hayes explains. “Ultimately we got out unscathed and it wasn’t a big deal, but it inspired me to write a song about it. Eventually, it ended up as a sort of supernatural police procedural. You could say that I X-filed it.”

Hayes dives into the politics of human nature on “Army Of Cops,” addressing the tradeoff between freedom and security in the post-9/11 era. “There is a part of the mind that craves freedom, but freedom comes with a certain amount of risk and responsibility,” he offers. “There’s also a part of the mind that craves convenience and security, and those things can be extremely tempting. People like to talk loudly about the former, but deep down they really want the latter. The government doesn’t have to oppress the public if the public oppresses itself.”

On the lighter side, “The Adventures Of Jason & JR” sees Hayes conjuring images of former vice president and noted creep Dick Cheney in a Halliburton jetpack, a Swedish lesbian commando team, and Scanners villain Michael Ironside for a power-grind duet with his friend Jason Hodges. “Jason has a wicked sense of humor, so I decided I would try to write a stoner action movie,” Hayes explains. “Once Michael Ironside showed up, everything just started falling into place. Plus, I figured a little humor might be a good counterpoint to the rest of the lyrics, which are more downcast.”

Like Book Burner and 2004’s Terrifyer, Head Cage boasts guest appearances from Agoraphobic Nosebleed vocalists Katherine Katz (on “Terminal Itch” and “Concrete Beast”) and Richard “Grindfather” Johnson (on “Army Of Cops”). “To me, they’re not guests, they’re family,” Hayes says. “I work very closely with ANb behind the scenes, so I just think of us as one big collective, like the Wu-Tang Clan or something. Rich and Kat both have such aggressive and distinctive styles, so I love using them in my vocal arrangements. They’ll probably end up being on the next album, too.”

As usual, Hull produced and engineered Head Cage. But this time he recused himself from mixing and mastering duties, handing both over to Fit For An Autopsy guitarist Will Putney, who’s worked with the likes of Body Count, Exhumed, and Knocked Loose. “I’m glad I decided to step away from mixing it, because I would’ve never gotten this thing done,” Hull says with a laugh. “I think it’s insane to be the writer of the record, recording everyone’s parts, and mixing and mastering it. I can’t believe I did that for all our other records. I should’ve handed pieces of it off to other people. So I’m happy I did that this time, and I’ll be doing it in the future as well.”

Despite all the changes—fresh inspirations, a non-Hull mix & master, bass (!)—Head Cage is Pig Destroyer through and through. And though years have passed and faces have changed, it’s imbued with the same innovative intensity that fuelled them in the first place. “We’ve never tried to be the biggest band in the world,” Hull says. “We don’t have big expectations as far as money or fame or whatever. We just want to create the music we wanna hear.”