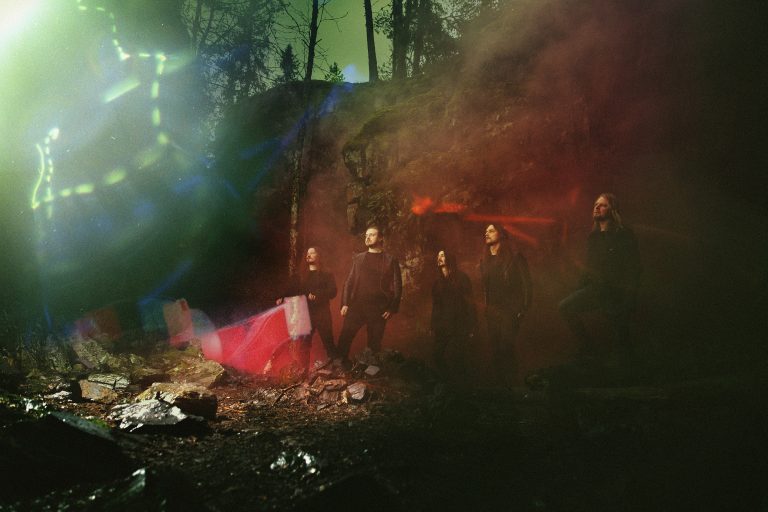 Uncovering the intensity and the metal inherent in non-metal, the avant-garde and anti-traditionalist inclinations of Finland’s ORANSSI PAZUZU have always had transcendental goals at heart.

As “Oranssi”, meaning “orange” in their native Finnish language, is the colour of cosmic energy and “Pazuzu” is the ancient Mesopotamian demon of the wind, their swirling kaleidoscope of psychedelia has blown through the underground to redefine boundaries ever since their inception in 2007.

Bass player Ontto describes their music as “A psychic storm that goes unexpectedly wild and colorful,” and ORANSSI PAZUZU’s blackened freak-out has been contorting minds throughout recent tours of Europe and USA. Invisible Oranges declares they “slug-shot their mental effervescence straight into your fucking soul with god-unmatchable power”, a sonic infiltration that Spin characterizes as “the sound of cyborg bulls unleashed in galactic China shops.”

The Queitus affirms that “the likes of SWANS and NEUROSIS naturally spring to mind as contemporaries to this music”, and like their peers, ORANSSI PAZUZU are sound-smiths crafting new worlds. Releasing 3 genre-warping albums, “Muukalainen Puhuu” (2009), “Kosmonument” (2010) and “Valonielu” (2013), before their critically acclaimed breakthrough work “Värähtelijä” (2016), brought them the buzz of fervent mainstream recognition, a place on James Hetfield’s personal Spotify playlist, a glowing review in Pitchfork and packed out live shows. ORANSSI PAZUZU’s trajectory has continued to soar.

“A dark master is rising. An illusionist, who uses secret knowledge to control the minds of the masses. A new totalitarian order is established and the heretics are silenced violently.“ – Ontto (Bass)

Through the rabbit hole and out the other side to 2020 with the release of their fifth album “Mestarin kynsi”, (“The Master’s Claw”). Inking a deal with German-based industry giants Nuclear Blast, ORANSSI PAZUZU subvert the idea of world domination to open a conceptual discourse on indoctrination and propaganda itself. Their psychological nightmare evolves a philosophical and earnest tone, where occult future meets troubled reality.

Jun-His: “We definitely wanted to look for new horizons, but on the other hand continue something we began building already on “Värähtelijä”. Some big influences were electro albums that inspired an idea about having a song that would travel through different kinds of portals whilst being mutilated and mutated by the new environment.”

On “Mestarin kynsi” the doors of perception are not only evoked but off their hinges. Working again with their co-producer Julius Mauranen, who also helped craft their acclaimed 2018 Roadburn Festival commissioned, WASTE OF SPACE ORCHESTRA collaboration live show/album “Syntheosis”, in their home-city of Tampere, Finland, the familiarity served a greater purpose towards the evolution of the album. As singer/guitarist Jun-His puts it, “there is a city heart pumping on this album somewhere”.

Saying that ORANSSI PAZUZU breathe new life into the rarefied air of 70s prog and krautrock or that they fuse supernatural acid-house into the methods of composers such as Glass or Reich, neglects to mention their canny sense of captivating rhythm and utter pop sensibility. ORANSSI PAZUZU’s “Kosmische-metal,” is Radiohead brought up in the misanthropic Finnish swamplands, filtering Philip Glass through a fractal lens of DARKTHRONE meets CHEMICAL BROTHERS. This is cutting edge sound art, a dangerously pumping and ecstatic red pill for a higher state of reality. Ingest for illumination.

“ORANSSI PAZUZU are discovering new worlds by searching both inward and outward at the same time.”
-Spin