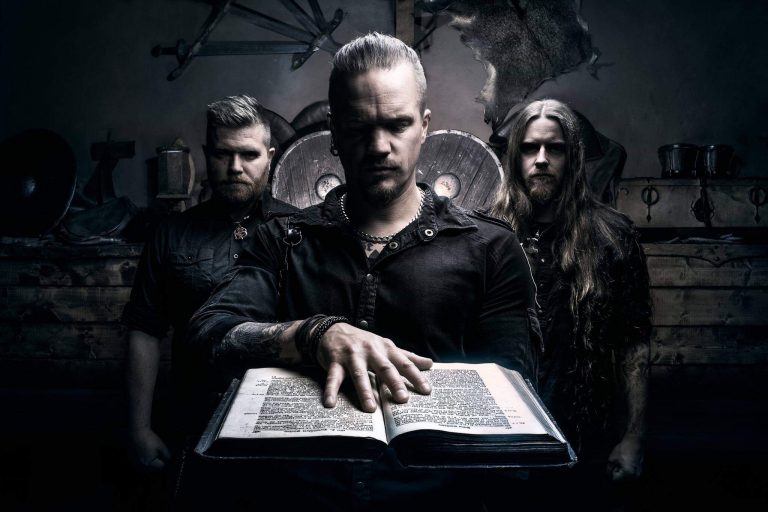 Månegarm is a Swedish Viking/pagan metal band that started up in Norrtälje, Sweden, in the end of 1995. Being one of the first bands to incorporate traditional instruments like violin and flute but also female vocals in the music, Månegarm is a pioneer and one of the longest lasting bands in its genre. After releasing two demos; ”Vargaresa” (1996) and “Ur Nattvindar” (1997) Månegarm signed a deal with the Dutch label Displeased Records and the first album “Nordstjärnans tidålder” was released in 1998; recorded and mixed in the famous Sunlight Studios (Entombed, Dismember) by Tomas Skogsberg. It was followed by the album “Havets Vargar” in 2000 and in 2003 Månegarm released their 3rd full-length album “Dödsfärd” which showed a more groovy and “folky” sound where the folk music melodies and the violin came to play a bigger part in the music.

In 2005 the 4th full-length album “Vredens Tid” was released, recorded in Underground studios just as the two previous albums, and it got really good reviews from fans and press. In 28th of June 2006 Månegarm released an acoustic EP called “Urminnes Hävd-the forest sessions”. This “special” album was something that the band had wanted to do for many, many years and finally this dream was realized. The music that can be heard on “Urminnes Hävd” is nothing like the regular Månegarm stuff because this time the songs only contained traditional instruments such as acoustic guitars, violin, flute, cow drums, djembe, jewsharp and clean male & female vocals.

A new deal was signed with the Swedish metal label Black Lodge and in May 2007 the album “Vargstenen” was released, the bands 5th full-length album. Once again the album was recorded, mixed and produced in Studio Underground with the help of Pelle Saether and once again Kris Verwimp painted the amazing cover art. Besides from great reviews, “Vargstenen” entered the Swedish national album chart at its release.

In 2008, besides from some Heidenfest Tour’ing together with well-known acts as Primordial, Eluveitie, Equilibrium, Finntroll and Catamenia; Månegarm ended their collaboration with Black Lodge and signed on to the Swedish metal record label Regain Records. The songs for the new album was already written and arranged so Månegarm set off to (by now the very familiar) Studio Underground and Pelle Saether to record the next masterpiece. The album, “Nattväsen” (night creatures) was released on Regain Records the 19th of November 2009 and contains loads of great pagan metal, as always performed with the traditional Månegarm touch.

In 2011, after the Neck breakers ball Tour together with Kataklysm, Legion of the Damned, Equilibrium and Milking the goat machine, Månegarm left Regain Records and luckily got in contact with Napalm Records from Austria. With great excitement a deal was made in late 2011 which meant a big improvement for Månegarm as a band. In mid April 2012 violin player Janne Liljekvist suddenly decided to leave the band due to different reasons but since the work with the upcoming album was already in progress the band decided not to look for a new violin player. The album “Legions of the North” was finally released in June 2013 through Napalm Records and received great reviews from fans and press all over the world.
LOTN was followed by the self-titled album “Månegarm” in 2015, the same year that Månegarm also celebrated 20 years as a band.

In 2018 Månegarm entered the studio to record their 10th studio album which is a conceptual album telling some fantastic stories based on great adventures sagas such as “Hervararsagan”, “Völsungasagan” and “Saga om konung Ragnar Lodbrok och hans söner” (the Saga of King Ragnar Lodbrok and his sons)

The album, named “Fornaldarsagor”, is released through Napalm Records in 26th of April 2019.