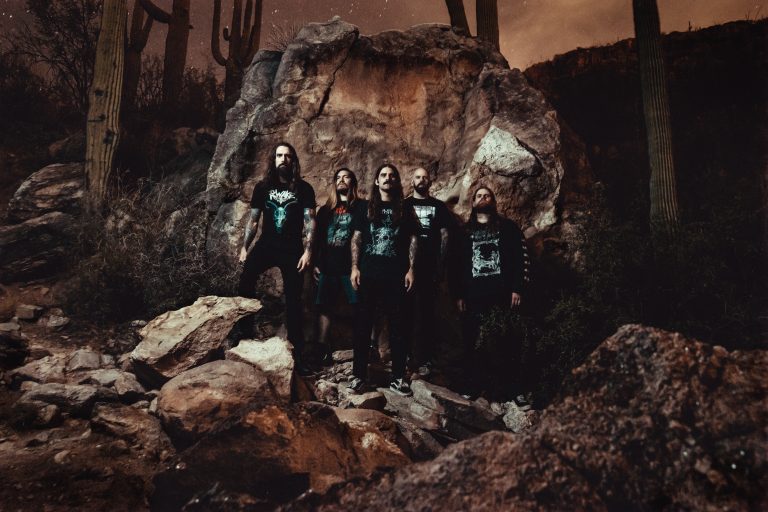 “Writing catchy songs has always been the goal for Gatecreeper. It’s all about the riffs.” Gatecreeper vocalist and co-songwriter Chase H. Mason doesn’t pull any punches when it comes to discussing his band’s modus operandi. For a genre in which many closed-minded zealots see catchiness as a dirty word, Gatecreeper go hard against the grain of the old school death metal revival. “We wanted to separate ourselves from the crowd and focus on having memorable songs,” Mason explains. “We wanted big hooks and catchy leads while still being extreme and aggressive.”

It’s on this basis that Gatecreeper’s second and latest full-length, Deserted, takes death metal from its 80s Floridian roots and 90s Swedish expansion straight into the here and now. In fact, the vanguard of death metal in 2019 can be found under Arizona’s searing sun. That’s where Gatecreeper’s members—Mason, guitarist Eric Wagner, bassist Sean Mears, drummer Matt Arrebollo and guitarist Nate Garrett—make their homes, spread across the twin frying pans of Phoenix and Tucson.

Of course, the band nodded to their scorching home state with the title of their 2016 full-length debut, Sonoran Depravation. The theme continues on Deserted, which boasts songs like “Sweltering Madness,” “Boiled Over” and the double-meaning title track. “Arizona is the last place people expect a death metal band—or any kind of band—to come from,” Mason says. “I think that makes us unique. And we rep where we’re from pretty hard.”

Like its predecessor, Deserted was recorded at Homewrecker Studios in Tucson, where Gatecreeper co-produced the album with engineer Ryan Bram. Converge guitarist Kurt Ballou handled the mix at Godcity in Salem, MA, and Brad Boatright mastered the album at Audiosiege in Portland, OR. Deserted’s hallucinatory cover art was created by Brad Moore, who did the mind-bending piece on the cover of Tomb Mold’s Manor Of Infinite Forms and whose death metal CV can be traced all the way back to Morpheus Descends’ 1992 disc, Ritual Of Infinity.

But make no mistake: Deserted is the record that separates Gatecreeper, once and for all, from the legion of HM-2 bands currently littering the death metal landscape. “Of course you wanna make a better record than you did before,” Mason observes. “The idea is to improve on what you’ve done before without really changing it that much. I kind of take pride in not being a progressive band. It’s very obvious what our influences are, and that’s fine. It’s like making a mixtape of our favorite bands, combining them into one thing and making it our own.”

You can hear the results on “From The Ashes,” a crushing cut primed for the European festival circuit. “That one’s a little bit different for us,” Mason says. “It’s definitely the most melodic thing we’ve done. It’s like the Wacken Open Air song on the record. I think people will be surprised by it. It’s more anthemic than what we usually do.”

Over on side two, “Boiled Over” fuses classic Bolt Thrower with the pulverizing power grooves of sludge titans Crowbar. “This one’s got a little bit of swagger to it,” Mason offers. “Vocally, the chorus feels like a mix of John Tardy and Freddy Madball. The lyrics are about having anger inside you that boils over and explodes, melting your body away. I’m not a poet, but that’s what it’s about.”

Closer “Absence Of Light” upholds Gatecreeper’s tradition of finishing their records with a slower track. “I really like death/doom and funeral doom sort of stuff, so the goal was to try that style out but stay close to the Gatecreeper format,” Mason says. “It’s probably my favorite song on the record.”

All told, Deserted exudes a newly honed confidence and strength. For Mason and Garrett, both of whom are also members of critically-lauded metal outfit Spirit Adrift, the new Gatecreeper album is another huge step on a creative path that ramped up considerably with the release of Spirit Adrift’s Divided By Darkness earlier this year. “I can only speak for myself, but I learn from experience,” Mason explains. “I’m self-taught at everything I do. I watch other people or read about it, and then kind of learn as I go along. So I think we’re just getting better at what we do.”