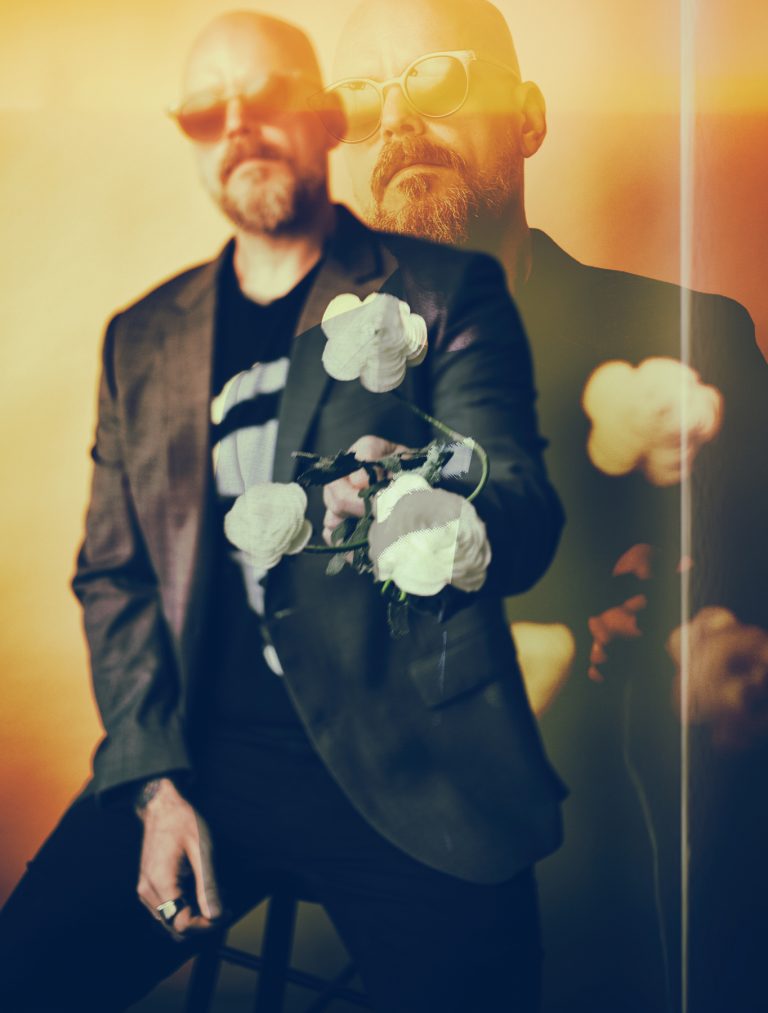 While Ryan Patterson, the singer, songwriter, multi-instrumentalist, and producer behind Fotocrime, often sings in an intimately whispered baritone, he stands in stark contrast to the laconic troubadour role typically associated with his hometown of Louisville, Kentucky. Patterson has spent over two-and-a-half decades adding to the town’s legacy with his impassioned and activist-minded approach to music, his distinctive work as a graphic artist, and his contributions to nearly every aspect of creative underground culture. After his time fronting forward-thinking art-inflected punk bands, Patterson looked to the urban centres of London, New York, and Berlin for new sonic inspiration, drawing from the passion of his roots while tapping into the sounds of classic EBM and post-punk artists for Fotocrime.

On his third full-length Heart of Crime, Patterson continues to explore what he refers to as “electric Southern romanticism.” It’s an album that throbs with pulsing synths, hammering drum machines and economic guitar hooks. Where so many artists have leveraged these tools towards stern stoicism, Patterson had a different objective for their emotional resonance.

This vision has been consistent across the entire Fotocrime catalogue, but where 2020’s South of Heaven found Patterson’s songs supplemented by Steve Albini-recorded live drums, a different approach was required for its follow-up. The worldwide pandemic broke outright as Patterson kicked off the South of Heaven tour cycle with a string of shows in Mexico. Consequently, Heart of Crime is the austere response to quarantine life. “This is by far the most direct and personal thing I’ve ever done in that 99% of everything on the recording is me,” Patterson says. “It’s the first album I’ve ever recorded and mixed myself.”

You would never know that Heart of Crime is his first venture into engineering an album on his own. The title track opens the record with an arpeggiating synth line and motorik drum machine beat that recalls the earliest German electronic artists. Patterson subverts the near-robotic vocal performances of the vintage electronic krautrock cosmonauts by delivering a call-to-arms rife with human urgency. “Electric Café” opens with a dusty minor guitar chord, recalling some darker golden oldie before the electronic kick and snare enter with their steady club-banger rhythm. One moment you’re gliding down Route 66 in some sepia-toned montage, the next you’re night-riding through a neon cityscape. There’s a bittersweet pop element to “So So Low” that chips away at the cold exterior of its mechanized pulse. It could almost serve as a standout track on an ‘80s film soundtrack, with a new wave allure that belies the heavy lyrical narrative of sorting through the belongings of a deceased loved one. Even something as minimal as the opening drum pattern of “Delicate Prey” feels steeped in the dichotomy between the urban and the pastoral—it conjures the opening beat of Pet Shop Boys’ cover of Willie Nelson’s “Always On my Mind.” Yet neither English synth-pop nor Texas country was the muse behind this rumination on the hunter and the hunted; Patterson claims the song was heavily influenced by ‘80s freestyle club music.

As the album progresses, the tone grows more menacing. “Politi Policia Polizei” fuses a minimalist analogue drum pattern against Western twang bass VI as Patterson dryly mocks the modern police state and closes the song with a lyrical nod to The Exploited. “Industry Pig,” with its pummeling beat, metallic slap bass, and muscular riffs is sure to satisfy any fan of guitar-centric ‘90s industrial music. On “Inferno Rebels,” Patterson conjures a modernized mash-up of Can’s Delay 1968 and side B of Neu! ’75 through his use of propulsive rhythms and a proto-punk snarl. The song is also noteworthy for its ominous saxophone solo—a first in the Fotocrime catalogue, performed by Patterson after picking up the instrument during isolation for the first time since early adolescence. Even the album’s pop apex, “Skinned Alive,” uses a beguiling melody and upbeat instrumentation to alleviate the song’s underlying meditation on mortality and loss.

On Heart of Crime, we hear the earnestness of the heartland fused with Patterson’s ties to the asceticism of the urban underground, like a post-punk Leonard Cohen. We’re also hearing an aspect of Fotocrime that’s a response and reaction to the times and available resources. It’s a record that yearns for a world outside our doors, that begs to be blasted on a massive PA in a seedy nightclub or a black-walled venue. It sounds steeped in isolation and reflection, but it reminds us of the communal experience of getting lost in a sea of people while the sound of a bass drum kicks our chests.