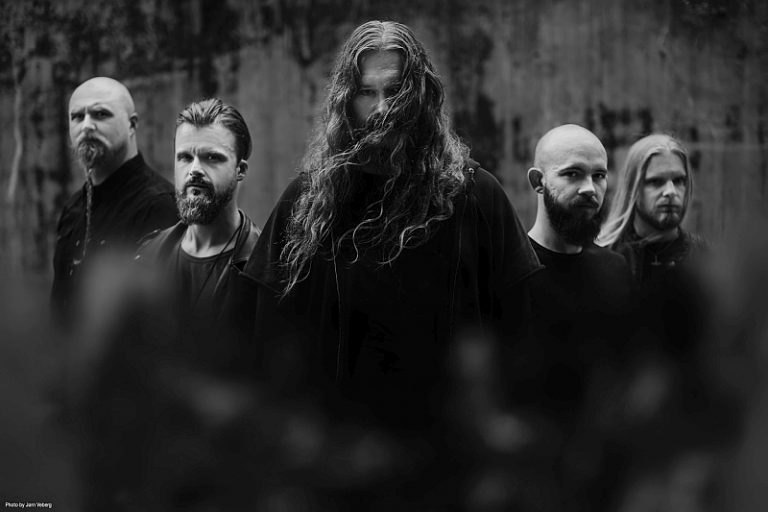 Intrepid black metallers Borknagar, in partnership with Century Media, mark their return with resplendent new album, True North. The Norwegians spent the better part of three years writing and rebuilding the lineup—Borknagar are now Øystein G. Brun (guitars), Simen “I.C.S. Vortex” Hestnæs (bass/vocals), Lars A. Nedland (keyboards/vocals), Bjørn Dugstad Rønnow (drums), and Jostein Thomassen (guitars)—to make their 11th studio album a reality. The reasons are plenty but the main driver for space between and change within Borknagar’s repertoire and membership was calibration. Chief songman Brun needed to refocus his labor of love after the assiduous Winter Thrice album cycle. Indeed, that’s exactly what he’s done on True North. While Winter Thrice was a celebration of time spent and bonds made, True North is the vanguard forward, clear-sighted, refined, and full of power. Truly, there’s no holding back now, but with year 25—the band’s silver anniversary—approaching next year, small wonder that Brun and Borknagar are still with us. Fortuitous, or part of the plan all along…

“Absolutely not,” Øystein G. Brun says [of the plan]. “Back in the day when I starting to play around with the ideas about the band I had no goal aside from making music I love myself. At that time, the whole concept of making money, doing big festivals and traveling around the world was so far off that I wasn’t even thinking along those lines. But that said, I have always had the belief that genuinely good music can move mountains.”

Metaphorically, Borknagar’s storied catalog of albums—starting with their coveted self-titled in 1996 through to 2016’s chart-smashing Winter Thrice—have moved mountains, starting with the Seven Mountains that surround Brun and crew’s hometown of Bergen, for if they hadn’t bravely traversed their proverbial peaks as young men and modern-day Vikings extreme metal history would’ve been far less eventful. And so, True North will continue the tradition of moving mountains with its sweeping dimensions of all things Borknagar. Intelligently crafted and panoramically gifted, the album will see the Norwegians reconnecting with their long past and forging ahead into new worlds. This starts with the many moods of 8-minute opener “Thunderous” and ends with the bare brilliance of the Nedland-led “Voices”, a contemporary folk song about our internal compass. When Brun called True North “the most diverse, powerful and grandiose album,” he wasn’t joking. He had the music to back it up.

“Yes, I stand behind my words,” says Brun. “In fact, I would argue that True North is more diverse than anything we have done before from an objective point of view. There is, in general, more variation and interesting dynamics going on throughout the album, from song to song. Even though we wanted to preserve a solid consistency throughout the album, we worked a lot to make each and every song stick out with its own personality and vibe.”

Written without longstanding vocalist Andreas “Vintersorg” Hedlund, veteran guitarist Jens F. Ryland, and drummer Baard Kolstad, True North is still defiantly Borknagar, largely because primary songwriter Brun remains at the helm. While the True North lineup shift may feel like the second coming of Quintessence, it’s not. Almost two decades separate the two albums, and Borknagar’s latest is a veritable showcase of musicians in their prime, aiming for the sun, the moon, and the stars. True North embodies the epic and valorous—as heard on “Up North”, “The Fire that Burns”, and “Mount Rapture”—but it also a portent of Borknagar’s next chapter. The promise of Hestnæs and Nedland as vocalists, Rønnow on drums, and Thomassen as Brun’s new sideman is unconditional, the beginnings of which can be experienced on “Wild Father’s Heart”, “Into the White,” and the aforementioned album closer “Voices.” Importantly, True North represents a unified—sonically, aesthetically, and personally—Borknagar.

“I guess it’s fair to still call me the primary songwriter,” Brun says. “Or the ‘grand old man,’ if you prefer that. But that said, yet another dimension to the production of True North was the fact that we worked much closer as a band with this album. For Winter Thrice, we worked more independently in our respective studios, sending files back and forth, but with True North we, for the most part, teamed up when recording various bits and pieces. A natural consequence of this was that we had a much more dynamic process, where various ideas entwined more. But of course, this is also because Lars wrote three songs and Simen one. Altogether, we had 12-13 songs written for this album, but in the end of the day we landed on nine songs.”

Thematically, True North continues where Winter Thrice left off. Unlike on past Borknagar albums, the lyrics aren’t as philosophical though. Rather, Brun and his team have opted for a more direct approach, leaving less room for fanciful interpretation. As for the title, True North, it was Hestnæs who came up with it. As usual, discussions around the title were had. Was True North the right title? Did it capture group’s new-found range and explorative spirit? How did it correlate to the nine songs Borknagar were offering? Even the cover, with the mighty Årbostadtinden mountain in the center, by photographer Thor Erik Dullum played into the overall direction (and meaning) of the title.

“It’s tough to wrap up a whole album in a few words,” says Brun. “But in the end of the day we felt True North captured the essence of the album. To me, an album title should hold various layers of meaning rather than being some sort of traffic sign. Actually, true north is a very basic term in the field of navigation/orientation. True north differs slightly from the grid and magnetic north as an example, which are somewhat relative depending on the scope and position of things. True north, on the other hand, is the constant in all this, sort of the baseline for all other directions. If you get completely lost at sea, you would need to find true north in order to pin out your orientation. I guess, that is the fundamental idea we want to flag with this album title.”

True North—like all predecessors through Empiricism—was recorded across several studios in Norway. Borknagar tracked Rønnow’s drums at Strand Studio in Oslo, while the foundational aspects of the album were laid down at Brun’s Crosound Studio in the Hordaland countryside. The keyboard and bass lines were cut at Nedland and Hestnæs’ private studios, respectively, for convenience purposes. But of the many key factors in recording True North under largely personal roofs—like Crosound Studio—was that Borknagar were able to control the quality of the final output without the crushing pressure of budget and time. For True North, the focus was getting studio guru Jens Bogren (Winter Thrice, Urd) audio in such a condition that the only job left was the mixing and mastering.

“We [Borknagar] teamed up here several times,” says Brun. “Locked ourselves in for a couple of days and did nothing but recording and producing. It was intense. Of natural causes, I did most of the engineering and producing, as all material went through my studio in order to prepare files. For every step, I processed the mixes so that we were able to lean back and get an impression of where all this was heading production-wise. So, guess I was in the forefront in terms of engineering and producing, but in the end of the day it was really all about teamwork. [As for Jens], he is the very best in what he does, quite simply. There are a lot of great mixers out there, but in my opinion, Jens is just a head above everyone else when it comes to mixing metal. His way of understanding our music and how he approaches the material given is close to god-like. And that’s coming from a hardcore atheist.”

As for what Brun wants Borknagar’s ardent fans to think after hearing True North, the cards are not in his hands. Rather, true to the band’s mandate, he wants the hordes of free thinkers to arrive at their own conclusions while on Borknagar’s newest musical adventure. Indeed, Brun offers, “listen and let your mind fly!” But for those in need of a little guidance, it’s true north of Winter Thrice, Empiricism, and The Olden Domain, an encapsulation of 25 years of work in a single, forward-moving entity. It’s the start of something new, the next stage yet it’s patently familiar. And as for the near term, Borknagar are preparing their indomitable vessel for a jaunt across Europe in late 2019, with possible ventures into the Americas throughout 2020.

The time to wonder at and find direction in the sonic spectacle that is Borknagar’s True North is now!