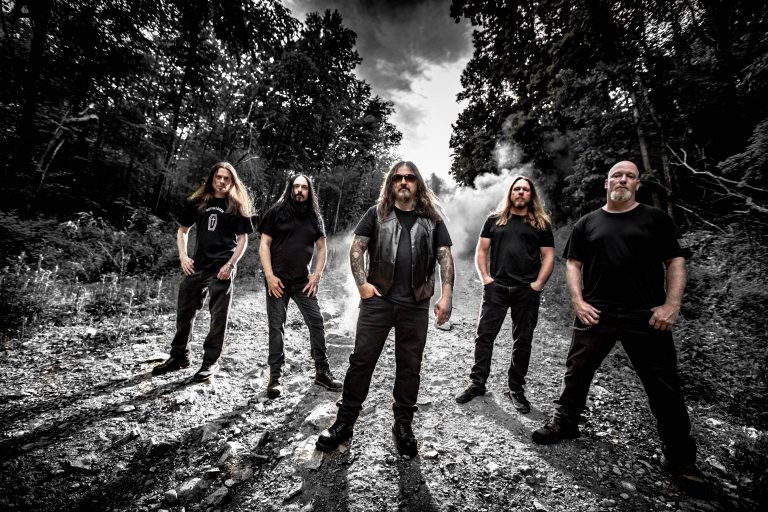 Music is our saviour in even the darkest of times. A PALE HORSE NAMED DEATH have demonstrated this unwavering truth throughout their first decade. Founded and led by multi-instrumentalist and Type O Negative alumnus SAL ABRUSCATO, the New York-based crew opened their creative account in 2011, with stunning debut album And Hell Will Follow Me: a slow-motion avalanche of crushing riffs, dark melodies and profound melancholy, with Abruscato’s heart-wrenching lyrics providing its songs with a deep emotional core.

In 2013, A Pale Horse Named Death released their second album, Lay My Soul To Waste. Musically opulent and even more punishing in sonic terms than its predecessor, it was widely acclaimed as the Brooklyn unit’s finest work to date. Innumerable live shows confirmed that the band were forging strong connections with a dedicated and passionate audience, and despite a six-year wait, the third APHND album emerged in 2019 to a uniformly positive response. Of course, the album in question – When The World Becomes Undone – was blessed with what now seems an eerily prophetic title, as within months of its release, the whole world locked down.

Even disasters bring opportunities, however. Less than two years after its predecessor’s release, A Pale Horse Named Death are poised to unveil their fourth full-length album, Infernum In Terra. Written and recorded during months of isolation in 2020, Abruscato’s latest collection of crestfallen anthems had a slow but satisfying gestation.
“Around January last year, I was already planning on recording some ideas,” he recalls. “So I started doing some sketching. I’d walk away from it for a while, then come back and do more sketching, but then the pandemic changed everything, so I’d get involved in other things. I just have too many hats, you know? [Laughs] I have many projects going on in my life, not just in regards to music. But the summer went by and I didn’t touch the new music, but by then I had around 85 sketches. Then the Fall came, and suddenly my brain was wide open, and between October and December, I started recording lots of stuff.”

The result of Abruscato’s spontaneous productivity is simply the finest record that he has ever made. Infernum In Terra showcases a bold and adventurous new upgrade for APHND’s trademark sound, with greater subtleties and depths but also some of the heaviest, gnarliest riffs the band have ever unleashed. Combined with a production that fills the room with sparkling clarity and choking gloom, Infernum In Terra will satisfy every last one of the New Yorkers’ fans, while expanding Abruscato’s singular vision beyond all expectation.

“The last record was a little bit of a rushed job of material that I had sitting around for a while,” he notes. “What I like about this record is that we have fresh artwork, a fresh outlook and all the songs were written last year. I brought in a lot more instrumentation in terms of tubular, orchestral bells and a piano, and things that support the heavy guitars. I like making the records as cool as possible. I don’t worry about being able to do things live, I just do what sounds right and what sounds good.”

Lyrically, too, Infernum In Terra represents a significant evolution. New songs like Cast Out From The Sky and visceral and epic first single Reflections Of The Dead are, of course, sodden with misery and emotional turmoil, but previous albums’ myopic approach has been rejected here. Instead, Infernum In Terra makes intermittent concessions to a more outward-looking perspective, enabling A Pale Horse Named Death to pass through fresh thematic territory.

“I guess it’s all still what A Pale Horse Named Death should be doing, but I backed off from writing every song about manic depression, self-loathing and suicidal thoughts!” chuckles Abruscato. “Unfortunately I’m a natural at it, because it’s a curse that I have. It was a little unintentional, but a couple of the new songs came out with a more Biblical theme, with stories like the fall of Lucifer. One song is about my experience of being put under anaesthesia. It was like being in another world – it felt like I slept for days, but it was only 20 minutes, you know? So there’s some new ideas, and some things about personal stuff and family stuff. I just didn’t make every song about personal torment.”

As it emerges into an uncertain and troubled world, Infernum In Terra seems certain to enhance the reputation of these weather-beaten underdogs. A lifelong creative with an already impressive resume, Sal Abruscato has savoured this new opportunity to explore the darkness of this wicked world, and produced his finest work to date in the process. In the darkest of times, A Pale Horse Named Death rides on with renewed vigour, forever raging against the dying of the light.

“I’m just happy to be releasing another record at this point in my life,” Abruscato concludes. “It’s fresh and I’m excited about it. Right now, the only thing left to do is put out music, I think! It’s a sketchy time and I hope it gets better for everyone. But I’m optimistic. I’m hoping there’ll be new fans that dig Infernum In Terra, and the old fans will dig it. It’s a natural progression and there’s some really cool stuff going on. I’m really proud of this record and I’m pretty stoked to see how people take it. This business is so fickle these days, I don’t know what’s gonna fly. I’m just doing what I like!”