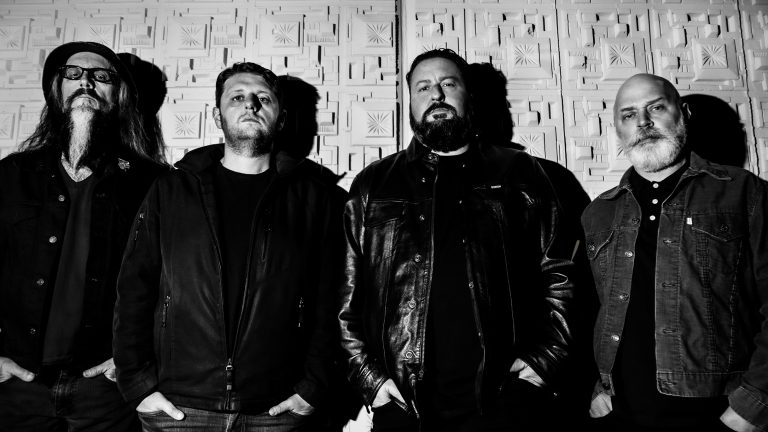 SoCal sludge stalwarts -(16)- are among the most consistent and most underrated purveyors of the heavy riff. The band was formed in Santa Ana, Ca. by Bobby Ferry (guitar), Cris Jerue (vocals), and Jason Corley (drums) in 1991, and was later joined by bassist Tony Baumeister in 1993. The band’s debut 7″, Doorprize, was recorded at the end of 1991, and was shortly followed by their first full-length album, Curves That Kick (released in 1993 on legendary artist Pushead’s label Bacteria Sour). Working with Pushead enabled the band to have the album released in Japan and gave them the opportunity to tour Japan, which happened in the summer of 1994. Soon after, the band performed select live dates with Slayer, the Melvins, Unsane, and Jawbreaker. -(16)-‘s follow-up record Drop Out was released by Pessimiser/Theologian records in 1996 to critical acclaim, which the band followed with a series of local and semi-local performances

Jason Corley was ejected from the band at the end of 1994, and was replaced by Andy Hassler. Phil Vera was also added as a second guitarist. The band released Blaze of Incompetence in 1997 (again on Pessimiser/Theologian), and completed a US tour with Grief in 1998. Andy Hassler was fired shortly after the tour. R.D. Davies replaced Andy, but he overdosed on heroin 6 months later and was replaced by Mark Sanger. The band’s next album, Zoloft Smile, was recorded in 1999/2000, but wasn’t released until 2002 via At A Loss Recordings. By the time the album was actually released, Bobby and Tony had both quit the band. The rest of the guys carried on, while Phil Vera remained as the band’s lone guitar player. Phil then took over vocal duties in 2003 after Cris was forced to go to rehab for alcohol and drug dependency. -(16)– toured the US and Japan as a three-piece (Phil, Mark, and Rafa) before calling it quits in 2004.

The band couldn’t fight its love for heavy music, though, and reunited in 2007 with a lineup consisting of Bobby, Cris, Jason, and Tony. -(16)- subsequently inked a record deal with renowned independent label Relapse Records and released their Relapse debut Bridges to Burn in Jan. 2009. The band parted ways with Jason Corley yet again (notice a pattern?), and recruited Mateo Pinkerton (ex Buzzov-en, Crom) as their new drummer. In early 2012 they released the album Deep Cuts from Dark Clouds via Relapse to widespread critical acclaim from publications including MetalSucks, Metal Hammer, Terrorizer and numerous others. Deep Cuts was followed by an eastern US with labelmates Tombs and still more lineup changes: in 2013 Dion Thurman joined as the band’s new drummer, and Barney Firks entered the ranks on bass. In support of Bridges to Burn and Deep Cuts, -(16)– have toured Europe twice, even appearing at major festivals such as Hellfest in France and Roadburn in The Netherlands. Additionally, the band has performed at US festivals Day of the Shred and Southwest Terror Fest and has shared the stage with a wide range of artists, from Neurosis, Nails, Indian, and Inter Arma to Noothgrush, Graves at Sea, ASG, and dozens of others.

In 2016, -(16)- returned with their 7th full-length album Lifespan Of A Moth, the band’s heaviest, darkest, and most complex material to date! Self-produced by the band and recorded with Jeff Forrest (Cattle Decapitation, The Locust) at Doubletime Recording Studio in San Diego, CA, Lifespan Of A Moth sees the band sounding uglier, rawer and more visceral than ever. Down-tuned feedback-driven riffs and bludgeoning rhythms violently clash with vocalist Chris Jerue’s distorted, tortured howls across eight tracks of -(16)-‘s signature blend of hardcore punk, thrash and sludge. Lifespan Of A Moth is the sound of a band that has spent 25 years wallowing in addiction and anguish, and will leave you feeling crushed and confronted by the negativity of existence. Despite constant lineup changes and internal turmoil, -(16)- have persevered, and the new album is sure to garner the band the recognition they so sorely deserve.

Fast forward to 2020 and -(16)- return with their new album, Dream Squasher. A testament to the power of loss, every moment of Dream Squasher casts the now San Diego based band into new, deeper depths. “A conscious effort was made to inject positivity into the lyrical themes,” guitarist and lead vocalist Bobby Ferry explains. “The best we could come up with is loving your dog so much, you’d end up killing yourself if the dog dies.”

The tragic, violent intent in this expression won’t be lost on listeners either; at any given moment of Dream Squasher, -(16)-‘s bouldering guitars crash into one another, set atop equally pulverizing bass and drums. Thunderous riffs express equal parts melancholy and fury. For the first time in the band’s 29-year career, Dream Squasher sees Bobby Ferry stepping forward and taking the helm on lead vocals, rounding out the band with both monumental moments of singing and pained screams of pure vitriol. From standout tracks like “Candy in Spanish”, to bruisers like “Agora (Killed by a Mountain Lion)” and the mountainous melodies of “Sadlands”, Dream Squasher proves to be -(16)-‘s return to form – where riffs dominate and anger reigns supreme.